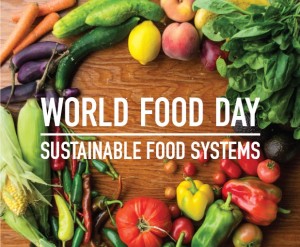 Did you know that 842 million people are estimated to be suffering from under-nourishment and chronic hunger? This is a staggering figure considering that the world has never produced so much food.

If the world is producing more than enough food why are so many people suffering? Food production relates to a variety of topics including politics, human rights and climate change and the problems that arise can be easily explored at home.

So this week, to mark yesterday’s World Food Day (16 October 2014), we’ve put together a range of resources about the challenges of feeding an ever-growing population which you can discuss with your children.

This year the focus of World Food Day is on the significant role that smallholder farmers play in feeding the world. In the poorest parts of Africa and Asia, around 500 million small family farms are responsible for 80%of all food production. This game from Oxfam will help your children learn more about the global food system and the impact it has on family farmers.

Why not try the “Flying the Kite for Food” activity, it is great for introducing younger children to the idea of food injustice. Let your children explore the reasons why some people in the world are hungry before making a kite to which they attach their wishes for a world without hunger.

Another idea is to test your children’s knowledge of different fruits and vegetables from across the world. Try creating authentic meals from the countries you have discussed!

Explore the themes of World Food Day 2014 further with this toolkit from the United Nation’s Food and Agriculture Organisation. There is a family-friendly leaflet, poster and Powerpoint presentation that can be used at home after school.  As a written exercise, can your children explain why family farmers are described as “an important part of the solution for a world free from poverty and hunger”?

In a society where we often take food for granted, it’s important that we show and discuss with our children that 842 million people worldwide aren’t as fortunate.